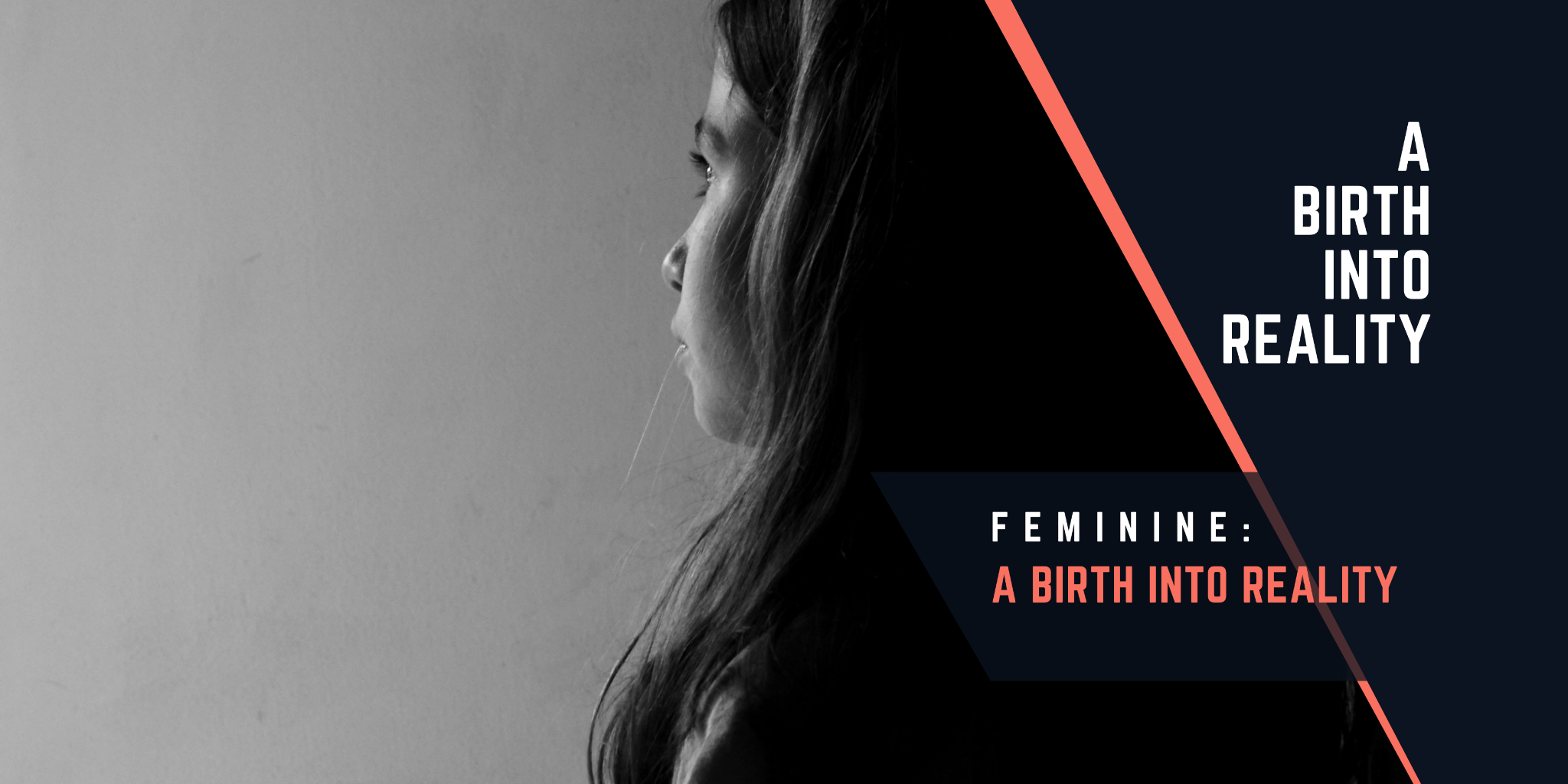 Feminine; A Birth into Reality

In October 2017, a case study published by the OECD on Gender Equality and Women Empowerment in Fragile and Conflict-Affected Situations weighed in on how the participation of women in peacebuilding and state-building is relevant.

However, in redressing the misplacement of gender equity, a few claims about the intervention of donor programs were raised on pages 13–15 of the aforementioned publication. raising concerns about the isolation of priorities and causing a disconnect in their impact. In my opinion, this should not be a negotiation of who gets what when who does this or that. If it is not providing access to equal opportunities without conflict, I'm sure there is some infraction to address.

This discussion is more critical as the violence against women and girls has grown, enabling controversial solutions. We cannot become weary of one another. Instead of compromising our psychology by treating this as a norm, we must coexist to become inter-relatable that the humane ecosystem is soothing to both sexes.

Furthermore, what standards do we set to make this progress? Without visibility, progress is impossible. "If change is not practiced, nothing appears to change"—how do we continue to address issues relevant to our individuality and the world at large?

On March 7, 2022, Lilly Singh performed “A Seat at the Table” Isn’t the Solution for Gender-Based Equity, a TED Talk discussing why a longer table with more seats is how best women’s role in development can work. I couldn’t’ agree more with this line from her conversation, “don’t just give one seat to women to sit on each other’s laps fighting over a plate.” Indeed. What could one seat at the table do? If we see past superiority and negligence, shouldn’t there be more seats at the table for everybody?

The fierceness of a woman originates from the struggle to survive.

Lily tells how the Singh family was disappointed by her birth. Her only fault as a child was being a girl. One of the many difficulties that every girl-child faces.

We’ve developed a community hostile to the female gender, and I worry for the generations we are raising with this mentality of waging revenge on each other as perspectives rather than finding common grounds. It’s at that level where discrimination is accepted as discipline, creating the culture of “tearing each other up” This may appear quasi, but to stay the course, proactiveness must be incaved.

Gender-based equity is a global cause in which everyone must participate wholeheartedly. The psychology instilled in generations to come is worrisome.

Every time I dream of an environment that works well in every aspect, I worry about the reality of gender inequalities. Nothing seems to go right. Although many others strive to do the right thing, this struggle can't be fought by flimsiness.

Is it more spiritual than psychological?

Playing the devil's advocate: to spare the rod and not spoil the child. A rod is a tool. The psychology behind sparing the rod spoils the child. It does raise curiosity. Is that not spoiling the child as opposed to saving the child? The child tries to understand the rod as saving them from inappropriateness, but seeing the rod as a tool to inflict pain on the other person tells a different story to the child, who makes up society.

How can we prevent the psychological impact of gender discrimination on individuals?

One of my many concerns is raising a female child amidst the world’s discrimination against her gender. Especially with all the abuse and injustice paraded every day.

Worrying about my unborn child is everything, but her perspective must be true to her beliefs, not what I want her to accept. What goes on in our minds usually goes unaddressed. We presume to understand and assume the picture is perfect, forgetting that everybody is born to act on what they have, and not oblige people to comply with policies that might differ from what they seek to achieve.

Comparing this set of cultural practices, in which women are forced to sleep with their husband's corpse, drink the corpse's bathwater, strip naked, and wear a black outfit to mourn the dead, to claims that the same culture does not allow men to do the same when they lose their wives, raises concerns. It's hard to believe that some cultures engage in such inhuman acts. A functioning judicial system is needed to put a stop to these practices.

Recently, a viral video of a lady being paraded naked after her husband died during intimacy has sparked reactions from all sectors. One such statement was issued by Senator Stella Oduah, a Nigerian senator, condemning the act. Her words, as published on Prime Business “My attention has just been drawn to a most disheartening video clip currently doing the rounds on social media, of a young woman being publicly paraded naked under the pretext of being directly responsible for the death of her husband. To say that I am shocked, petrified, and angry is, to put it mildly, for I cannot for the life of me imagine that something as backward and despicable as what was showcased in those clips, still exists in today’s world where there are established lawful channels for seeking redress…”

Trending stories such as this show the lack of proper education on how to redress issues with justice, but the question is if there’s a law—a law that is not functioning is no law at all. These are reasons women need more seats at the table for development. It appears to be a cold war. Pings me to query as to what went wrong.

As a young lad, I witnessed my boss beat up his wife seven days after giving birth to their son. This was shocking. I hadn't experienced this with my parents, even in arguments. It always gives me a new perspective on how to treat human beings. Something is sickening about this infliction on women. They are human. Treat them as such.

I learned that a generation inherits directions, not what you teach. The narrative controls the emotions.

Re-visiting Lilly’s TED Talk conversation, a claim she established that “a woman is expected to be grateful for having a seat at the table in the first place.”

It’s her right to be at the table as a development stakeholder. Why should she be deprived? When we say she should be grateful for having a seat, is it the seat you inflict her injuries or in grave lifeless or debt for the show of love or in a hot divorce mess? The belief that it’s not within a woman’s right to inherit and that it makes her look irresponsible to have too much wealth – baffles me.

Lilly Singh outlines how to build a table that doesn’t suck:

With these case studies, I came up with the following solutions and areas where we can perform them with diligence. Furthermore, I understand we have far too many options, some of which we are not proactive at, but we cannot stall our actions because of a failure to take them. We must keep reminding ourselves that there is so much to achieve. We need a wake-up call, not a dead-end.

Solutions to gender inequality and a better world for all

1. “Educate Generations to Potential” – State-building involves investing in education for generations existing and those yet to come with curricula that promote development into their potential. To keep away from creating a biased environment, every child must be educated to their potential, not have gender blindness to educate one part and limit the standard of the other. Education is more than just the school wall and books read; the mentality instilled is what makes up the personality of every individual. What do we need to educate future generations on that becomes a potential for them and a standard for society?

2. “Engage the girl-child industrially” – “I don’t want a liability as a wife or girlfriend,” says every young man. And to the person demanding, "What do you have of value to offer?" Because women are perceived as weak at first sight, the narrative is to shame them for being unproductive. The question is, how can that narrative be curved? Engage the girl-child industrially—research shows that women are proactive and productive in organizations, industries, businesses, and social engagement. Females are vocal and dedicated. We need them for industrial growth and expansion. Not up for negotiation. Women and girls must be involved in multitudes of industrial activities.

3. “The girl-child growth count” – “women maturely rapidly.” I don’t conform to that barrier. However, both sexes mature differently. A female child understands empathy and commitment, while a male child embraces responsibilities and thinks ahead. Over the years, it has pushed both sexes to that maturity instead of allowing them to experience it. Society is biased by belief, chastising what challenges us and embracing what makes life appear easy. Allow the girl child's development to count; it is part of restructuring every time. Both sexes' developmental traits are vital to societal solidity.

4. “Anti-discriminatory programs must equivalent to non-abuses of genders or cause prejudice” – Referring back to the donors’ intervention case study from the OECD publication, there is a disconnect between the donors’ intervention program and the anti-discriminatory course and women empowerment as claimed. Sometimes this is taken advantage of by painting a façade of helping women get empowered or bolstering the effect. In turn, this only serves to foster the donor’s needs.

5. “Practicing a legitimate law that functions” – We need a judicial system that works and serves everybody. Many states have adjusted the constitutional rights of everybody equally, while some are still debating that correctness. Maybe they need to understand that having a judicial system that works sustains a reputable society. That doesn’t say there won’t be misdemeanors, but justice will take its course. Many perpetrators get away with all these insensitive crimes, which shouldn’t be. In many countries today, lawmakers have passed laws on assaults not just against women but across all walks of life. and hasn’t taken its course as it appears victims are liable to blame for the act, making them more traumatic about the incident.

These issues presented how society builds upon these ideas as an ecosystem and generation nurturer to the effect that interest takes its course on individuals.

A West African proverb states, “in matters raised, every soul has their cause point,” This will sound too biased if the acceptance comes from that angle. There are always two sides to a story, and different phases of these stories are perceived from different perspectives. Through the gender lens, disorderliness will cease to live between both genders.

Feminine, a born into reality-shades nothing but how best to make the world contain and work for every human being. Peace amongst ourselves is all that is needed. The gender equity is not a fight for women only, but a balance for every human playing their part responsibly and significantly.